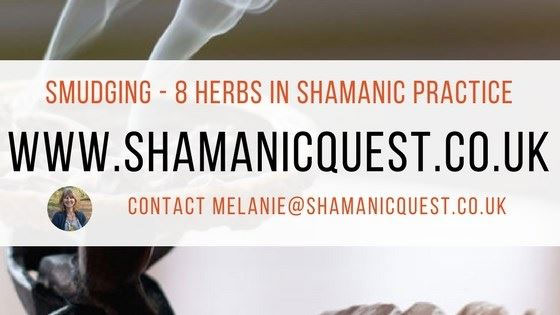 Shamanic smudging is a tradition which has been used for generations to create peace and harmony. There are many different smudging ceremonies, and different shamanic practices use a variety of herbs for smudging. Shamanic smudging is the burning of herbs or incense for cleansing, creation of sacred space, purification, dismissal of negative energies and protection of both physical and spiritual bodies.

You can use herbs that are tied into a bundle, commonly called Smudge Sticks, braided herbs and botanicals, such as sweetgrass or loose herbs which can be burned on charcoal or in a fire pit. Shamanic smudging releases the energy as well as the fragrance of the herbs enabling them to heal, cleanse and purify.

Different shamanic traditions use different herbs for smudging. Some of the most popular herbs include desert sage, white broadleaf sage, juniper, pinon, sweetgrass, lavender and juniper.

Shamanic smudging can be used daily for practical purposes: to restore physical, mental and emotional balance and to shield against negative energies, and herbs can be used singly or together. One good combination we’ve found which covers all four elements of air, fire, water and earth is pine resin and sage (either desert sage or white broadleaf sage). This combination is appropriate for general use, cleansing, ceremony and ritual.

Primarily an air element herb though can also be used as for four-element general purposes.

Has a sharp, light and refreshing scent. One of the most sacred herbs in Shamanic practice.

Used to purify the mind, body and spirit before prayer, meditation, ritual or ceremony.

Also used to purify sacred items such as pipes, magical tools, tarot decks and eagle feathers. Can be used for area, house and personal cleansings.

Some people carry a small amount of Sage in a pocket ensure personal and spiritual safety.

Primarily a fire element herb, though can also be used as for four-element general purposes.

Has a pleasant fragrance and is cleansing and warming. Traditionally used for its spiritual and healing properties.

Produces a thick stream of smoke, and is excellent for refreshing the senses and reviving a tired soul.

Produces a lot of smoke when burned with a very earthy, piney scent. Gathered from an almost leafless Middle Eastern shrub called the Commiphora Molmol.

It was used by the ancient Egyptians in rituals of Healing and Passing. It is one of the ingredients used
by the Egyptians to embalm bodies.

Primarily a fire element though can also be used as for four-element general purposes. This is the resin of an African tree and produces a rich, dense smoke when burned.

Primarily air element though can also be used as for four-element general purposes.

This is a broad leaf sage with strong aromatic properties (strongest of the different types of sage).

Considered the king of all sages. Excellent for meditation, divination, smudging, cleansing and purification.

Sweetgrass Hierochloe odorata gets its name from its sweet-aromic fragrance. Burned as an incense, sweetgrass is valued for its vanilla-like scent.

Clippings of sweetgrass is commonly braided and and then dried prior to burning and its light fragrance does not last long. Excellent for cleansing sacred space.

Traditionally, sweetgrass is believed to attract good spirits and positive energies. It is used as a smudging tool to purify peoples auras, cleanse objects, and clear ceremonial areas or healing spaces.

Juniper has a sharp, piney scent and is excellent to stimulate and revive when tired in body, mind or Spirit.

Traditionally used for ritual purification of temples. Its smoke is believed to aid clairvoyance.

Also useful for purification and to stimulate contact with other worlds.

Primarily water element. Produces a heavy, warm, aromatic scent with just a hint of sharpness and scent lasts a long time after burning.

Whether you’re looking to join a workshop or course, or book a private consultation, I offer a free 15-minute telephone consultation to discuss what you need.